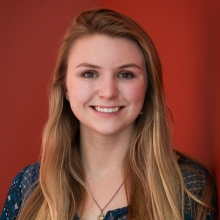 Jadie is pursuing a Doctoral Degree in Computing with a focus on machine learning and image processing techniques for biomedical data analysis.  She earned a BS degree in mathematics with honors from Westminster College where she also minored in physics and computer science.  Her research background ranges from publishing on the interface of snow and human sciences in avalanche safety literature, to solving open questions in the pure math field of tiling theory, to patenting new technology for enhancing language models in automatic speech recognition systems.  At the University of Utah, she will be working with research assistant professor Dr. Shireen Elhabian from the Scientific Computing and Imaging Institute on a project in the orthopedics domain, using deep learning to construct 3D models from sparse x-ray images for anatomical shape analysis.  She believes in the potential for computer vision and probabilistic modeling to make diagnosis more accurate and less expensive for all.  In her free time, she enjoys skiing and backpacking in the mountains as well as tending to her garden and playing with her new puppy. 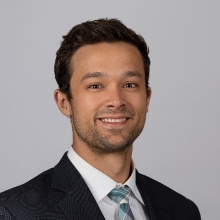 Sean Collon, MD, completed his Bachelor of Science at the University of Michigan in 2012 and earned his medical degree at Vanderbilt University in 2019. In the intervening years, while working as a mountain guide in Washington and Alaska, he developed relationships with individuals who would become mentors in ophthalmology and global health. With these mentors, he worked in several low-or no-cost clinics both at home and abroad, and realized a passion for addressing healthcare inequities. In medical school, he held a staff position at the student-run free clinic where he helped to implement a teleophthalmology diabetic retinopathy screening program. He also returned to Nepal and worked to investigate and implement a mobile phone-based teleophthalmology protocol to improve detection of retinal and optic nerve pathology in rural screening camps. Beginning his ophthalmology residency at the University of Utah, he hopes to continue to address healthcare inequities through continually working to improve the effectiveness and sustainability of outreach efforts, as well as through minimizing the environmental impact and cost of high-quality eye care.  Sean received the Mark and Kathie Miller Foundation Award. 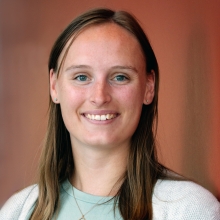 Emily completed her BS in Civil Engineering at Gonzaga University in 2017. After graduation, she started her career as an Engineer in Training on a structural engineering team at a company called DLR Group in Seattle. During her two years there she was exposed to the design of many different construction materials including wood, steel, and masonry on a variety of projects ranging from schools to justice centers to warehouses. After working for a while, she decided to return to school to pursue a graduate degree from the University of Utah. She is excited to be back in the academic world, and looks forward to applying the experience she had while working as a designer to future research projects. In her spare time, Emily enjoys hiking, cooking and spending time on the water. 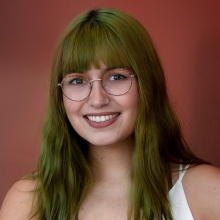 Lizzie completed a BA in Mathematics with honors at Scripps College, where she became interested in issues of social justice arising from the use of machine learning to automate decisions that affect people, such as credit scoring, loan eligibility, and other risk assessments.  She worked as a data scientist while completing her MS in Computer Science at the University of Massachusetts in her hometown of Amherst.  At the University of Utah, Lizzie is pursuing a PhD in Computing under the supervision of Professor Suresh Venkatasubramanian, studying how to audit algorithmic systems for fairness, justice, and other legal and ethical qualities.  She hopes that her work will support the development of technology policy. 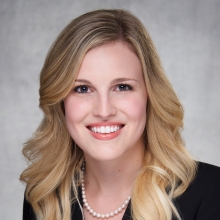 Allie Marie Simpson, MD, received her Bachelor of Science degree in Biology with a minor in Chemistry from the University of Northern Iowa in 2014. She graduated Summa Cum Laude and was awarded the Purple and Old Gold Award for demonstrating outstanding academic success. Her undergraduate research focused on plant genetics, and her work helped elucidate homeobox gene regulation of leaf morphology in a member of the grape family.  Dr. Simpson earned her medical degree from the University of Iowa Carver College of Medicine in 2019. She was an active member of the Glaucoma Genetics Lab at the university’s Institute for Vision Research and graduated with research distinction. Her work aided in the discovery of a new disease-causing mutation in a patient with LADD syndrome and open-angle glaucoma. She also independently screened over 200 glaucoma patients from the Faroe Islands for known glaucoma-causing mutations. She was elected to the Alpha Omega Honor Medical Society in recognition of her leadership, scholarship, and service and received the Thomas A. Weingeist Award for her research in ophthalmology. Dr. Simpson is looking forward to engaging in further glaucoma and anterior segment research at the Moran Eye Center.  Allie's award was funded by Diane and Tom Might in honor of their grandson, Bertrand Might. 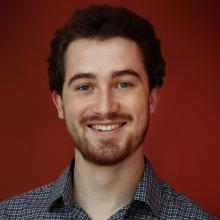 Sam is pursuing a doctoral degree in materials science and engineering with the goal of advancing his career in renewable energy photovoltaics (PV), a term which describes the conversion of light into electricity using semiconducting materials that exhibit the phtovoltaic effect, a phenomenon studied in physics, photchemistry, and electrochemistry.  At the U, he will be working under the direction of associate professor Mike Scarpulla.  sam earned a Bachelor of Science degree in engineering physics specializing in materials science at Case Western Reserve University in Cleveland, OH.  He wrote, "After earning a PhD in materials science and engineering, I hope to be a leader of PV research and development in industry or government."  Sam also enjoys film and digital photography, cycling, and served as president of Habitat for Humanity. 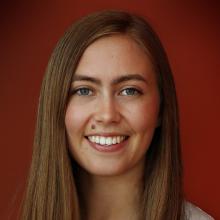 Chantel came to the University of Utah Department of Bioengineering from the University of Vermont where she was a research assistant investigating ventilator-induced lung injury.  She completed a Bachelor of Science degree at the Rochester Institute of Technology in Rochester, NY.  Chantel was an RIT Presidential Scholar and received numerous academic awards and scholarships.  At the U, she will be working with associate professor Christopher Butson in the area of deep brain stimulation for the treatments of neurological disorders such as Parkinson's disease.  Chantel worte, "I enjoy research at the boundary of engineering and medicine where advancements in engineering and methodology have the potential to have a profound impact on healthcare."  In her spare time Chantel enjoys a variety of outdoor activities such as horseback riding, skiing, mountain biking, hiking and sailing, among others. 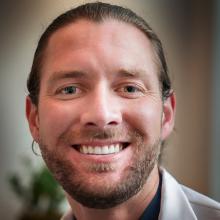 Dr. Jacobsen is a first-year ophthamology resident at the John A. Moran Eye Center at the University of Utah.  He plans to focus on the retina and the treatment of retinoblastoma--a type of eye cancer most common in children.  Jacobsen earned his medical degree from the University of California, Irvine School of Medicine and completed a general surgery residency at Baylor College of Medicine.  At UC Irvine, Jacobsen founded the International Ultrasound Project, which uses medical students to teach ultrasound and conduct research in Mwanza, Tanzania.  He also received a $60,000 John Tu grant to initiate what hs now become an integrated medical education course at a Mwanza medical school.

Jacobsen's many research projects range from investigating alternative treatments for patients with retinoblastoma to the feasibility of using ultrasound as a diagnostic imaging device in low-resource settings.  He plans to continue his research at Moran, combining it with his passion for furthering high_quality care in underserved and resource-limited areas. 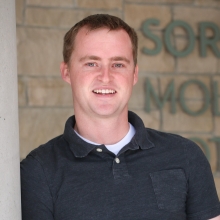 Alex completed his undergraduate degree in mechanical engineering with a minor inmathematics at Brigham Young University. At the University of Utah, he is engaged in microfluidics research with Professor Bruce Gale, where he will be focused on advancing the understanding of exosomes function as a promising approach to cancer vaccines and therapeutic delivery vehicles. Alex hopes to devote his future to research a way of contributing to the world through scientific advancement and discovery. As an undergraduate, Alex worked on submarine acoustics and water surface measurements, intelligence gathering via satellites, and providing humanitarian aid through the development of a low-cost prosthetic limb. He is a member of Tau Beta Pi Engineering Honors Society. 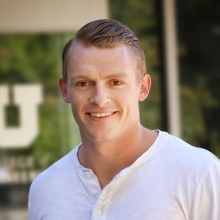 Marcus Perry was an exemplary student in chemistry at Westminster College. While he always intended to pursue graduate studies, Marcus accepted a position in industry to gain experience and help focus his interests. As a pharmaceutical chemist at Pharmatek Laboratories in San Diego, Marcus discovered his passion for materials science and engineering, especially in the characterization and development of novel materials. In addition to his active engagement in undergraduate research in computational chemistry and molecular modeling at Westminster, Marcus played on the Men’s Varsity Basketball Team and was named captain in his senior year. Marcus is currently working with Assistant Professor Taylor Sparks on the on the discovery, synthesis, and characterization of new materials for energy applications. 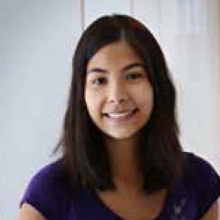 Amanda Reynolds completed a BS in biochemistry at the University of Florida in Gainesville. As an honors undergraduate, Amanda mastered advanced research techniques in fluorescent microscopy where she created protocols and ran her own experiments working as a research assistant in the Materials Science Department and Veterans Affairs Hospital. As a graduate student in Bioengineering, Amanda researches the properties and uses of Collagen Mimetic Peptides in drug delivery and imaging applications. She aspires to a career in pharmaceutical research. 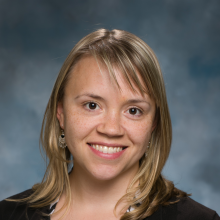 Rebekah Gensure graduated summa cum laude in Biomedical Engineering from Boston University, followed by graduate school at Rutgers University, receiving the PhD degree in Biomedical Engineering in 2013 and MD degree in 2016. Rebekah performed her PhD thesis research with David J. Foran, PhD at The Cancer Institute of New Jersey and the Rutgers University Center for Biomedical Imaging and Informatics. Using 3D tumor characteristics, she developed a prognostic tool for treatment planning and response assessment to radioembolization therapy in patients with liver cancer. Returning to the medical school curriculum, Rebekah served as a Vision Research Scholar in the Wills Eye Hospital Research Department under the direction of Julia A. Haller, MD and Lisa Hark, PhD, where she made significant contributions to a $3 million grant submission to the Department of Defense for the use of trans-corneal electrical stimulation for improvement of ocular dysfunction in patients with traumatic brain injury. Her remarkable research productivity includes eight peer-reviewed journal articles and 13 conference proceedings /abstracts.