Alex Jafek, ARCS Utah Scholar 2016-2017 will be presenting his abstract “Quantifying Microfluidic PCR at Extreme Speeds” at MicroTAS 2017.  MicroTAS is a premier conference attracting presentations from all over the world.  This year's conference will be held in Savannah, Georgia in October.   As part of his email to ARCS Foundation Utah Alex said,  "I wanted to share my gratitude for the opportunity to be an ARCS Scholar over the last year. The ARCS funding has allowed me to pursue exciting avenues of research (including this specific project) and the investment in me as a student has inspired me to work harder every day. "

The research project is involved with the continued development of instrumentation which facilitates the world's fastest PCR (affectionately called "extreme PCR”.)  PCR is the method by which a single strand of DNA is turned into many strands of DNA (on the order of millions to billions of copies). It is important because all applications where DNA is used (individual identification, paternity tests, disease screenings) require amplified DNA as they are not sensitive enough to work with the single strand of DNA that would come from say, a single cell. Normal benchtop hardware requires about 40 minutes to an hour to complete the process.  The group that Jafek works with has demonstrated hardware capable of doing PCR in less than 2 minutes.  A large component of the speed is in the chemistry discovered by collaborators in the Wittwer Lab (University of Utah), but Jafek’s group’s instrumentation will be a great step forward in looking for applications of the process.

Specifically the work that will be presented will demonstrate the ability to extract quantitative information about the DNA as it is amplified at theses extreme speeds. Specifically, while the DNA is amplified we can take pictures of the reaction to tell how well the reaction is going, and to determine the type of DNA that is present in the sample (including possibly viral DNA). The ability to extract this information simultaneously with a 2-minute amplification makes it possible to imagine a hardware system where a tiny drop of blood or saliva can be tested for the presence of a virus while the patient waits. 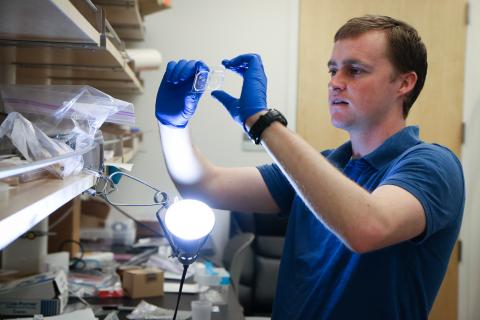