A few bold and pioneering women recognized the potential for ARCS® Foundation in Utah in 2009. They set about launching the Utah Chapter, dedicated to enhancing America’s national and local capacity for research and innovation in science and technology by financially assisting students who demonstrate high scholastic ability.

Orientation and information sessions were presented by National Board members Judith Miller, Vicki Griffin and Darla Mueller during February through April 2009. Interested women were recruited, leaders for the Chapter began to emerge, and our kick-off event was held on June 30, 2009, at the home of University of Utah President Michael Young, with over 50 people in attendance. In addition to Dr. Young, speakers included Engineering Dean Richard Brown, ARCS National Board representative Judith Miller, Utah Chapter President Cece Foxley and Dr. Siam Oottamasathien, an ARCS Scholar alum from the University of Colorado and currently assistant professor of Pediatric Urology and director of Pediatric Urology Basic Science Research at the University of Utah. 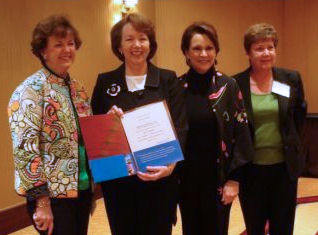 The Utah Chapter received its charter October 3, 2009, and by the end of the first year had almost 30 members and four honorary members. At the May 7, 2010, College of Engineering Convocation, Dean Richard Brown presented Outstanding Service Awards to Judith Miller and Cece Foxley for their volunteer efforts in helping to establish ARCS Foundation Utah. In his remarks, Dean Brown said, “The inspiration for the Utah Chapter came from Judith Miller, who spent nearly two years laying the groundwork at the University of Utah. A longtime friend of the university, Judith is the past National Board president of ARCS Foundation and has helped establish chapters across the U.S. We are also pleased to honor Dr. Cecelia Foxley, who is serving as the first ARCS Foundation Utah Chapter president.  As the former Commissioner of Higher Education, Cece brings in-depth knowledge, understanding and commitment to the higher education process. She also brings her passion as the mother of a successful chemical engineering graduate from the University of Utah. Judith and Cece, on behalf of future generations of students, we thank you for your lifelong commitment to supporting our nation’s future engineering leaders.”

“The ARCS scholarship helped me in three major ways.  First, it has removed from me a major stressor for a lot of graduate students: money. Second, for lack of a better word, the ARCS scholarship has flattered me.  It is a subtle psychological thing, but it has definitely changed the expectations I have for myself.  Finally, connecting with you, Dr. Foxley, has been extremely helpful…having another person in my life who cares and understands how I’m doing, which have all made my first year even more successful.”

“I am grateful to the ARCS program for the motivation that it has given me to achieve my goals.  I have always been a motivated person in all that I do, but being an ARCS scholar has made me strive harder, and study harder to achieve my goals. I believe that the advancement of science and engineering in our country is so important ,and I hope to make contributions to that advancement in the future.”

“Being an ARCS scholar allowed me to choose my own project instead of taking on whatever project had funding, so I chose to continue working towards creating a more sustainable concrete infrastructure."