While an undergraduate, Nicholas Nolta (Nick) read about brain-machine interfaces and how they could provide bionic vision, hearing, or motor control for people who had lost these functions due to stroke, injury, or disease. He also read about how, in the far future, they might be used to expand the experiences and capabilities of healthy/able people. Nick couldn't think of a more interesting field to work in and pursued a PhD at the University of Utah in the lab of Dr. Patrick Tresco.

As a first year PhD student, still getting his financial bearings and finding his footing in the academic world, Nick was grateful to receive an ARCS scholarship. The financial boost, confidence boost, and networking boost were all extremely helpful and very much appreciated.

Nick's PhD research focused on the foreign body response to microelectrodes implanted in the brain. The University of Utah is the birthplace of the Utah Array, commercialized by Blackrock Microsystems and now used in numerous groundbreaking studies including human clinical trials. The device has dozens of tiny, pointed microelectrodes that are inserted together into brain tissue to eavesdrop on the electrical activity of neurons or talk to neurons by delivering small bursts of electricity. These signals can be used to control external devices such as robotic arms or allow sensory information like visual stimuli to be sent into the brain. Unfortunately, the performance of these devices is variable, with some lasting years but others failing within months. Nick's research in the Tresco lab involved implanting Utah Arrays into rat brains to analyze the biological responses to the implant. He found that certain aspects of the foreign body response correlated with loss of performance, which provided insights into how the devices might be improved.

After that, the newly-minted Dr. Nolta was eager to start designing better neural microelectrodes, but realized he had limited hands-on experience with the complicated techniques required to fabricate microelectrodes. Dr. Martin Han, a recent arrival at the University of Connecticut, had previously developed his own microelectrodes with a very different architecture than the Utah Array. He hired Nick as a postdoc to re-establish his microfabrication process at his new location. In the photo, Nick is wearing a "bunny suit" in a yellow-lit cleanroom, where dust and blue wavelengths of light must be kept to a minimum. Similar techniques and facilities are used for the production of computer chips. Together Dr. Nolta and Dr. Han developed improvements to the material robustness of the microelectrodes and tested them using high-temperature saline soak tests, with the eventual goal of obtaining regulatory approval for human clinical trials. Dr. Nolta also found time to contribute to Dr. Han's other projects involving spinal cord stimulation and image reconstruction.

Next Nick plans to go into industry and put his diverse experiences to use designing the next generation of neural microelectrodes. He would be elated to someday see a device he had worked on benefiting people. 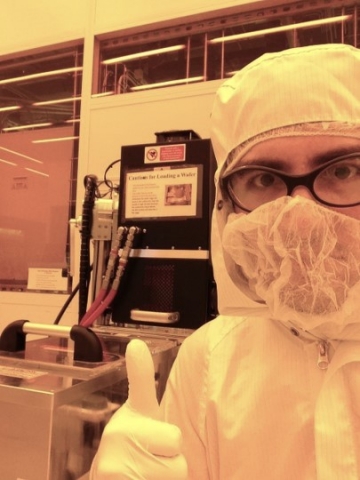