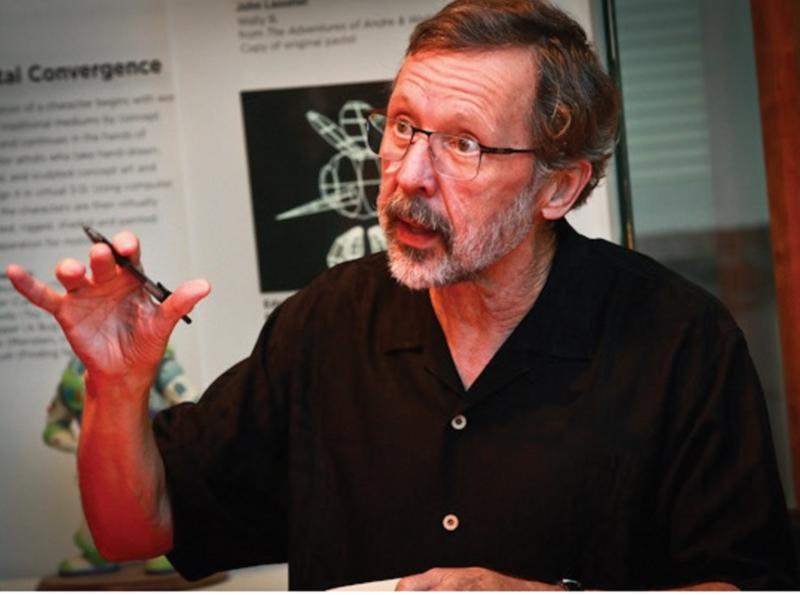 Our first official ARCS event of the year was hosted by the College of Engineering.   We gathered with our new and continuing ARCS scholars for introductions and a chance to catch up.   Almost all of our ARCS scholars that are in town attended.    After our private gathering, we attended the reception, talk and book signing  by Ed Catmull, co-founder of Pixar Animation and now president of Pixar Animation and Disney Animation, in the Catmull Gallery of the John and Marva Warnock Engineering Building.   Each of our scholars received a copy of his latest book from our chapter.

Forbes magazine has raved that Catmull’s new bestseller, Creativity Inc. “just might be the best business book ever written”.  It is also noted as being “a book for managers who want to lead employees to new heights, a manual for anyone who strives for originality.” It is, at heart, a book about how to build a creative culture-but it also, as Catmull states, “an expression of the ideas that I believe make the best in us possible”.

The lecture had great enthusiasm and everyone in attendance was excited to meet and have their personal copies of Creativity Inc. signed. Catmull went on to explain during the lecture portion of the evening that it was when he first attended the University of Utah in 1963 as a physics student, he knew what he wanted to pursue designing graphics but didn’t know how to get himself there. Back then, there wasn’t a field of animation available but Catmull did have the foresight to switch his studies to computer science as graphics were first emerging as a technology.

“When I was here as a graduate student, I knew at that time that there was something special going on,” Catmull reminisced. “And all of the students felt that — we were privileged to be part of something that was magnificent.”

Pixar is famous for having one of the best track records of any production house in Hollywood. The studio first exploded on the Hollywood scene in 1995 with the Academy Award-winning “Toy Story” and has since produced an unprecedented number of box office and critical hits including “A Bug’s Life,” “Finding Nemo,” “The Incredibles,” “Cars,” WALL-E,” “Up,” and “Frozen.” In all, Pixar has won 12 Academy Awards and six Golden Globes.

“I have found the lessons in the book to be profound, whether you’re running a creative company the way he is or trying to run a creative university the way I have. There are many similarities,” said University of Utah President David Pershing, who also spoke at the event and welcomed Catmull back home Utah.

Dr. Rober Kessler and the School of Computing at the University of Utah College of Engineering hosted the ARCS Foundation, Utah Chapter for lunch and a presentation on the Engineering Arts and Entertainment Program which is ranked #1 in the nation.  Following the presentation members had an opportunity for a hands on session to try their hands at designing their own video game.

The 4th Annual ARCS Foundation Utah Scholar Awards Luncheon was held on Wednesday, October 30, 2013 at the John A. Moran Eye Center, with 65 people in attendance.  Utah Chapter President Margaret Niver McGann welcomed everyone and gave some introductory remarks about the ARCS Foundation and the outstanding support the Utah Chapter is given by the University of Utah College of Engineering, the Moran Eye Center and pro bono assistance provided by the Parsons Behle and Latimer Law Firm.  She indicated that so far the funding committed to this important effort by chapter members is $15,000 for each of our 14 ARCS scholars, 12 in Engineering and 2 at the Moran Eye Center, for a total of $210,000.  The second and third year funding is provided by the College of Engineering and the Moran Eye Center for a total of $420,000, bringing the grand total of funds provided and committed to $630,000.  She then invited Dean of the College of Engineering Richard B. Brown and Dr. Robert E. Marc, Director of Research at the Moran Eye Center to make some remarks.  Dean Brown expressed appreciation and complimented the ARCS Utah Chapter for enabling the College to recruit some of the best Ph.D. engineering students in the country.  Dr. Marc, on behalf of Director Dr. Randal Olson, also expressed gratitude and gave an overview of the faculty of Moran and their areas of research and clinical practice.

Margaret then introduced the 2012-2013 ARCS scholars who were invited to give brief presentations on their research.  Jennifer Bauer discussed her research in biomedical instrumentation and fluid dynamics of biological systems.  She stressed that she wants to use engineering to improve the quality of medicine.  Katherine Lambert discussed her research involving electrical stimulation for the treatment of neurological disorders.  She helped lead a team to design a calibration device for pulse oximeters.  Megan Prestgard described her research using spintronic materials and devices fabricated from such materials.  She is involved in conducting research in the industry of semiconductors and electronic devices.  Brian Zaugg has an MD in ophthalmology and is involved in research to improve the cataract surgical processes.  He stated that he is invigorated by the research.  All four scholars were passionate about their research and indicated that they hope to make important contributions to their specialities.

Margaret invited outgoing Chapter President Dr. Anne Erickson to join her at the podium.  She gave her a bouquet  of flowers and thanked her for her dedication and leadership.  She then asked her to join her in introducing the 2013-2014 scholars and presenting them with their ARCS plaques and lapel pins:  Matthew Hamilton, Chemical Engineering; Michelle Hromatka, Computer Science; Megan Walsh, Civil Engineering; and Brian Stagg, Ophthalmology.  Margaret and Anne congratulated each of them for being selected as ARCS scholars.  Following the program, attendees were invited to tour the research  laboratories of Dr. Margaret DeAngelis and Dr. Liliana Werner. 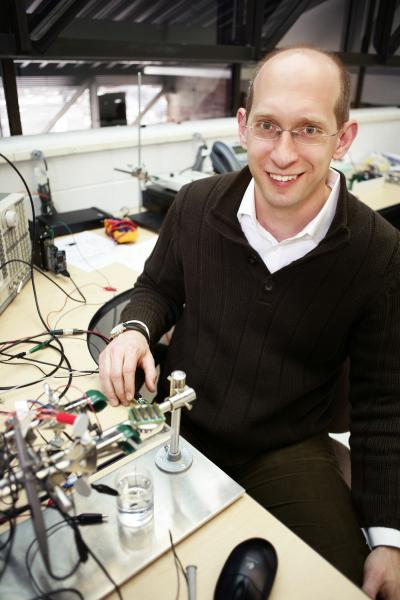 ARCS members were very fortunate to get to spend the afternoon with Florian Solzbacher,Ph.D., Executive Chairman and President of Blackrock Microsystems. The company's new building and laboratory opened in June of this year.  This company is an impressive representation of the exciting collaborative work currently taking place at the University of Utah. Professor Solzbacher also serves as the Director of the Microsystems Laboratory at the University of Utah and is co-Director of the Utah Nanotechnology Institute. His research focuses on harsh environment microsystems and materials, including implantable, wireless microsystems but also high temperature and harsh environment compatible micro sensors.

Attendees enjoyed an enthusiastic “head to toe”, explanation of the very complex topic of implantable devices in the human body. Exciting avenues of these implantable devices include cochlear implants and robotic limbs in paralyzed patients.  This translates into deaf patients being able to hear and quadriplegic patients being able to have the autonomy to independently feed themselves and perform activities of daily living. The patient’s brain is even able to sense and perceive temperature from the robotic arm hence providing scientific breakthroughs that almost seem surreal. Professor Solzbacher has indeed discovered and achieved truly advanced miracles in the field of human science. 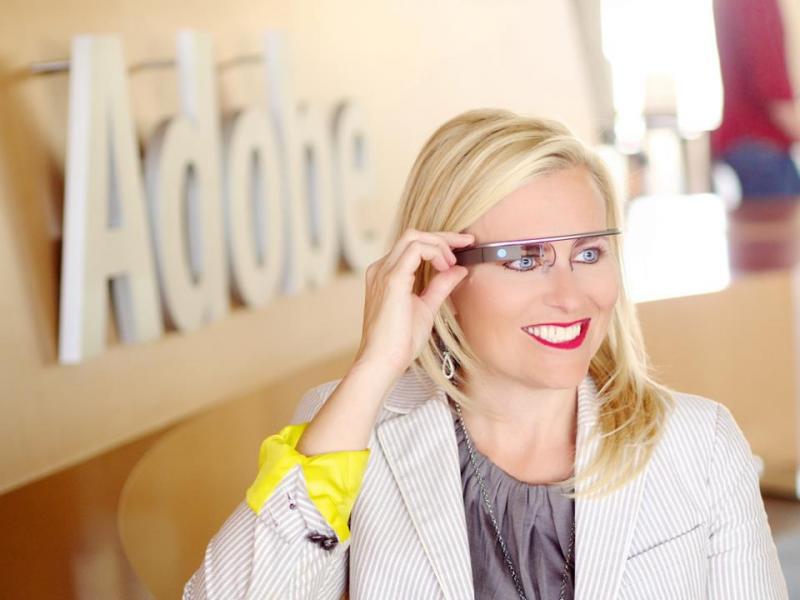 ARCS Members joined the Women Tech Council 2013 Spring Networking Event sponsored with Google and Google Developers Group at the Lehi, Utah Adobe facility to learn about and demo Google Glass.  The event included a tour of the new Adobe building and a post-event developer session on Google Glass.  Shown with the Google Glasses is Cyndi Tetro, Co-founder and Executive Director of WTC. 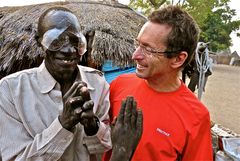 ARCS members attended a presentation by Dr. Geoffrey Tabin of the Moran Eye Center describing the work being done to bring quality cataract surgery to locations far outside the reach of usual surgery centers.  Using innovative time saving techniques surgeons can perform large numbers of surgeries in a single day, bring sight to many who otherwise would become blind.